How to Find a Lost Dog

First of all get him on Doglost, a free service and notify the database he is microchipped with and have him flagged as missing.

A missing dog will go into survival mode, everyone and everything will be a threat. Even you.

Yes! I do mean your dog, the one that sleeps in your bed, follows you like a shadow, loves you to bits.

Some will go into survival mode as soon as they’re lost, others may take a few days but until it happens you don’t know so be prepared!

Do not call his name, do not try and catch him and do not chase him.

You need to think like a dog. Think how a wild animal would react, that’s what he’s doing.

All searches should be carried out in silence and it is important that all shrubs and greenery is pulled right back so that you can see right down to the ground.

Searchers should have with them:

What to do if you see your lost dog

Drop to the floor, do not look at him straight on, sit at a 45° degree angle so you can see him peripherally but not be a threat.

Hum. Make quiet lip smacking nom nom sounds, and with a slow flick of the wrist, throw some food in his direction and wait.

He will either bolt or stay where he is. He may come back…..or will freeze and watch. If he watches keep throwing little bits of the food.

If he takes the food and moves closer, on no account grab for him no matter how close he gets.

Dogs don’t think like we do or process information like we do, they rely solely on their instincts.

A lost dog doesn’t recognise owners or their voices.

Their red mist is down …. they won’t recognise you by sight. Their first sense is their nose, they smell first. Recognition by sight or sound will be the last thing he will comprehend.

If you know the area he is hiding in then scent the area. Smelly socks, worn clothing, anything that he will recognise.

Urinate on bushes and the ground. Try to stimulate his sense of smell.

By stopping moving and sitting low you have reduced the threat level, in his eyes. You are giving him the choice, meaning he has no need to bolt.

You are simply freezing that moment to hopefully give him time for his senses to kick in.

Imagine you are trying to find and catch a fox…. A vulnerable wild animal which is living in a world where it is survival of the fittest, and to have tall people marching towards it, looking straight at it, calling words, probably heightened with a sense of urgency, talking or smiling…..all the fox sees is a predator that is bigger than him. That’s how we look to them.

The success in catching a dog is getting into their mindset.

Human emotion needs to be curtailed as any successful rescue is dictated by the dog not the human.

Settling and stay in the area it feels safe in allows the dog to start to think a bit more rationally and its then that triggers can occur in its brain for food,etc.

What to do when you’ve had little success

If moved on, your dog’s cortisol levels will increase and the stacking system can cause a longer time for the dog to show.

It won’t feel the cold, won’t be hungry, its survival instincts will have set in and your domesticated dog will be using its true instincts to survive and keep itself safe. Everyone and everything will be seen as a predator in this stage.

If this happens and you no longer know where he’s gone to ground then it’s time to think about using a drone and/or thermal imaging.

If you or a member of your family are on social media then a search will find the people nearest to your area. Doglost will help you as well.

You may need to resort to trapping but this isn’t a job for amateurs. Please take advice from those who have the equipment and the knowledge to do so correctly.

Pat and Lionel Waterhouse have rescued many many English Toy Terriers. Pat has aided several owners in the search for their lost dogs over the years and is an active supporter of the Pet Theft Reform campaign. 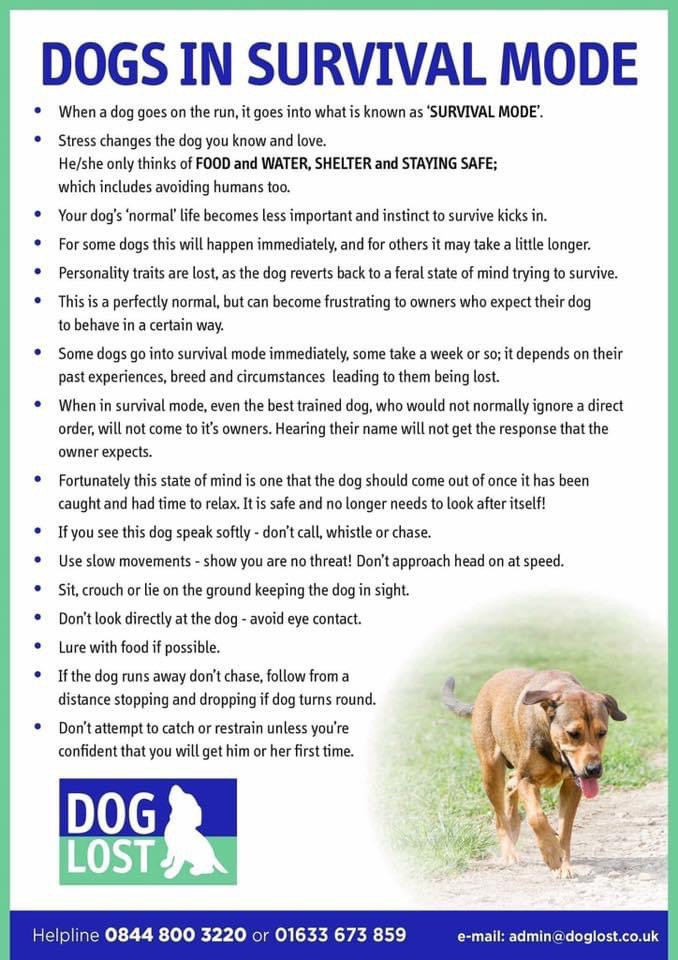 Does size matter when breeding ETTs?

Read about Supersonic Xai the English Toy Terrier from Norway, and his owner Sarah.