It’s mid-morning, Friday, 2nd May. I’m looking at a fridge full of sandwiches in a motorway service station that I do not want, while my retired travelling companion firmly insists I choose one, because “you need to eat”, like I was thirteen years old or something. I really don’t, but I give in to her demands and pick a muffin instead to have with my coffee, which we drink in my car, squinting in the sun, and watch the big trucks pass by on the M1.

Like most people, I had never heard of the breed prior to 2012 when my wife and I decided to get a dog. I had always fancied some sort of sighthound : I had grown up around Italian Greyhounds and I had always admired their delicate gracefulness but I thought they were a little on the small side for me. I knew that rescue Greyhounds were ten-a-penny, but these dogs can take up a sofa on their own and I didn’t feel our house was big enough to accommodate one. 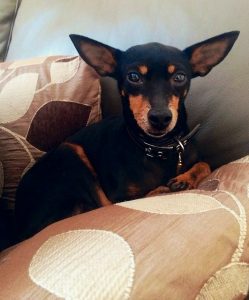 After a lengthy search, my wife found ETTs advertised online and contacted the breeder – Pat Waterhouse up in Chester.  Getting an ETT is not as simple as buying a car. It isn’t important if the car likes you, or if the salesman thinks you are a fit owner and driver of the car!  My wife had a long conversation with Pat who very kindly deemed us suitable and the arrangements were made and a date set to collect our first ETT.  We named him Ron.

I didn’t think I would like a small terrier as a pet: I am a sighthound person at heart, but such a big personality in such a small dog is hard not to love.  He is tenacious, strong willed, funny and affectionate. He also actually cuddles you. So as he grew, my interest in the breed grew.

My neighbour, another lady called Pat, hereafter referred to as Pat G, a retired NHS nurse, mother of six, had been a life long dog owner but had always preferred the larger breeds like German Shepherds. She currently has an eleven-year-old ex-racing Greyhound called Tara. She unfortunately lost Tara’s lurcher companion, Ritz, last year. Pat had never been interested in small dogs, but over the last few years she has fallen under the spell of Ron, so much so that last year she made some enquiries about getting her own ETT, but was put off by the potential cost of a puppy. I said to her at the time that ETT rescues are rare, but it was not impossible that a dog would become available at some point. We’d keep our fingers crossed. 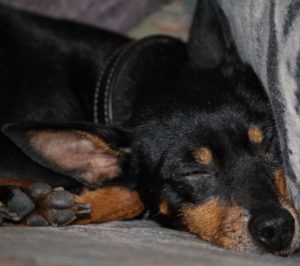 Meanwhile my wife kept in touch with Ron’s breeder and we sent her pictures of Ron growing up throughout his first year. Our interest in the breed grew and we attended the Discover Dogs show in London to see the ETT stand and then we went to the 2013 Windsor Dog Show where our breeder Pat and her husband Lionel were showing some of her ETTs. She suggested to us we keep in touch with her and other liked minded people with Facebook, so we joined up. Through social media we discovered the wider ETT community and have made some good friends.

We attended Crufts in Birmingham this year on the Toy day to see the ETTs. There an odd coincidence occurred – I was taking some pictures of the dogs being shown from the ringside, when a lady behind me asked me politely if I would mind emailing her some photos of a girl showing a dog from her kennel. I said that I would, and sent the pictures to her email address when I got home. The lady replied thanking me a week later apologising for the delay, saying she had been unwell. I thought she had caught the cold I had caught at Crufts which made me ill for a week afterward, but it turned out to be much more serious than that. The lady I sent the photos to was Pat Selby, an ETT breeder in Nottinghamshire who ran the Wickedwise Kennels, and she owned Spider. She sadly passed away a short time later. 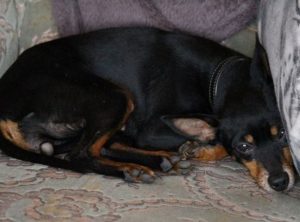 The community rallied round and homes were quickly found for all of Pat’s ETTs, with the exception of Spider. The Bat Signal went up on Facebook.

My immediate thought was: we’ll have her. But Spider is eight, and needs a quiet life. She doesn’t need Ron and Stan bouncing on her head with their youthful vigour. Then I remembered what my neighbour had said to me … and the proverbial light bulb went on!

Pat G was initially sceptical: her main concern was affording insurance for two older dogs on a fixed income, but with the help of Compare The Meerkat we were able to find an affordable solution. That done, the next thing to do was organise a conversation between Pat G and Pat Selby’s sister who was managing her sibling’s estate and was currently looking after Spider. The conversation must have went well because when Pat G got off the phone she had only one thing to say: “We’ll go and get her.”.

A few days later, a friend sends us some pictures of Spider curled up in her bed, she looks well, but it’s obvious she is smaller than Ron. A date is agreed to pick Spider up, the 2nd of May. Every time I see Pat G she is counting down the days.

So on that day, we travel North. Pat G does not drive, so I offer to take her up on my day off. She was fully prepared to get a train, but I couldn’t let her do that, hence her insistence on buying me lunch on the way up …

The journey to the farm where Spider lived should have been straightforward but it takes us an hour to do the last ten miles due to roadworks and then it proves quite difficult to actually find the place.

Pat Selby’s sister, relatives, and friends of the family who are visiting welcome us. We have a much-needed cup of tea and then Pat G is introduced to Spider for the first time. She is about two-thirds the size of Ron, with a nice thick coat. She is a bit nervous of us but after a while she allows us to stroke then cuddle her. For Pat G, it’s love at first sight.

We end up spending a pleasant few hours at the farm, and a friend of the family brings down her champion ETT boy for us to meet as well.

Soon though, it’s time to say goodbye and we prepare to go. It’s a bittersweet moment as the family say goodbye to a well-loved dog and I can’t help wondering how this little shy girl will react to being taken from her home. We put her bed in the car on the back seat and Pat G gets in beside her to keep her company and we start the long journey back South.

As it turns out she is fine on the way back, she curls up in her bed and looks at us with her big eyes. Pat G stays beside her all the way home quietly reassuring her she will be fine. The motorway unwinds in front of us quickly enough, but it’s the middle of the evening when we pull up outside our front door. 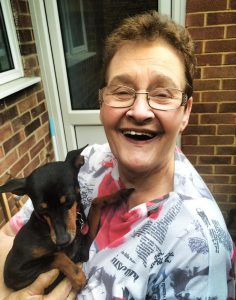 We take her in and put her down. She tentatively sniffs and takes a few steps. She looks nervous and her tail is tucked between her legs. The people there are told not to fuss at her and give her some space. Then Tara the Greyhound comes in, wondering what all these people are doing. She sees Spider and her ears perk up. Tail wagging furiously, she approaches Spider and drops into the classic sighthound play-bow: let’s play and be friends. Spider, tail still between her legs, angles her face toward Tara, the whites of her eyes showing. Her lip curls back exposing teeth. Growls rather deeply for such a small dog. It’s a clear warning. Tara, who towers over Spider, takes no offence and leaves Spider alone to retreat to her bed we brought from the farm. She curls up in a ball, never taking her eyes from us. She is confused and a little frightened at the change in circumstances. We give her space and in a while give her a meal. A little bit of wet food and biscuit – she eats her food without any fuss. It’s a good sign and we are relieved. It’s been a very long day and I am tired and hungry after the long journey. My wife drags me out of Pat G’s and I go home, order a pizza for my (very) late dinner and then go to sleep. Before I turn in, I update the community on Facebook on the day’s events.

We awake early and our first thoughts are about Spider’s. We wait until half past nine before going next door. Spider is eating her breakfast when we see her. She had a good first night; she stayed in her little bed and slept right through. There has been no further conflict with the Greyhound. We feel encouraged.

On the second day Spider started to follow Pat G around the house, in the classic ETT manner, even when Pat mowed her lawn. She explores the house and garden and after one ‘accident’ figures out she needs to go outside when she needs the loo!

On the third day, Pat took Spider out for a walk for the first time. We didn’t know how she’d be on a lead but she was brilliant. She walked just fine and was well behaved and calm. She has no problems keeping up with Tara, and there is still no conflict between the dogs, Tara has accepted her and gives Spider all the space she needs. Pat G found Spider nestled up to the big Greyhound on her sofa shortly after. The omens looked good.

Spider has since met my two dogs Stan and Ron, as well as Ruby, a pretty Staffordshire Bull Terrier who belongs to one of Pat G’s daughters. Spider and Ron just sniffed each other politely (Ron usually submits without question to other dogs but oddly didn’t with Spider), but poor Stan and Ruby were told in no uncertain terms to go away by Spider. Ruby, the Staffie, actually hid behind her owner when Spider growled, while Stan just looked bewildered and disappointed in that endearing way only Whippets can. Spider has since slightly warmed to Stan and now silently tolerates him.

The story ends here – Pat G adores Spider, and Spider is very much at home now, stealing Pat’s chair and jumping up for cuddles in the evening. I’m so happy and relieved it’s working out. My thanks go out to everyone who helped and lent support. You know who you are.

When you think about it, it is amazing how resilient dogs are, even as they grow older. They adapt to new circumstances remarkably, truly living in the moment. They don’t judge, they just accept and trust.

Who said that you couldn’t teach an old dog new tricks?

Let’s take our minds off the world and create some art. Draw your ETT, share your masterpieces with us!

Does size matter when breeding ETTs?

Be the first point of contact for a prospective new owner. List your kennel in the English Toy Terrier Breeders Directory and make yourself easy for newcomers find.