In Loving Memory of Sylvia Johnstone

“ETTs didn’t sell themselves to me at all! The breeder’s English Toy Terrier did not stop barking, she would not come to me, and she hid herself behind the sofa.  As I had already made the trip, I persevered with the visit.  I got some background on the breed and gave the Breeder some references from people who would vouch for me as a good owner.  I asked the breeder to recommend me if she heard of any pups coming up for sale.

Within a few days Pat and Lionel Waterhouse arrived with Kiera who promptly took over the house, and everything went very well.  Night time arrived and she was to sleep in the kitchen in a cage, along with the Labradors who were loose in their beds.  She cried all night, and all of the second night as well.  By the third night without sleep, I stumbled into the kitchen opened the cage and told her if she got squashed it was her own fault.  She promptly got into the big bed between the two Labradors.  Silence reigned, and gradually over time she has worked her way into my bed!

I don’t think I did decide to get an English Toy Terrier, I think my first English Toy Terrier – Kiera, decided for me.  I also have two Labradors, we bought them since we moved to this house.  It was agreed when we moved here, that when my old dogs died they would not be replaced.  We moved in with six dogs.  When my last dog died (a 17 year-old Chihuahua) I began to miss I small dog.  So, with my sensible head on – I trawled the KC lists of dog breeds.  I wanted a short-coated breed because the arthritis in my hands was getting worse, and I needed something small that I could pick up.  I came across the English Toy Terrier.

I had never heard of them, and there aren’t many dogs I haven’t heard of.  They are not like the type of dog I would usually go for, but they didn’t have any major health problems, and I just wanted a small dog – any small dog!  So the search for a puppy began.  On the KC list there was a litter in the next village, and I knew the lady by name, so I rang her – but the advert turned out to be 2 years-old.  I asked her would she mind if I visited and met her dogs as I had never seen one before.  She said yes, so off I went to meet them.

For the first couple of weeks she was just a sweet puppy, still quite alien to the types of dog that I usually go for.  But she was determined I would love her.  She insisted on sleeping on my lap whenever possible, and she followed me around – even to the loo.  I wasn’t keen on being followed – I like a dog to be independent.

The first time she was allowed out, a friend and I took her dogs and mine to the beach.  Kiera, who by this time thought she was a Labrador – took off down the beach after Megan and Sophie.  They went through a pool left by the sea, not deep for the Labradors – but when Kiera went in after them she was swimming!  I ran after her, but she had climbed out by the time I got there.  She was dripping, and the look on her face was priceless.  I put her inside my coat to dry… and by then I was completely hooked.

She has been allowed more privileges than any of my other dogs.  We have a telepathic bond – I think she knows exactly what I plan to say before I say it.  If I am putting her lead on, she backs up to me while I attach it.  She blocks the front door if she thinks we are going out without her.  She isn’t too keen on the company of the other English Toy Terriers (thinking she is above them) but she tolerates them. 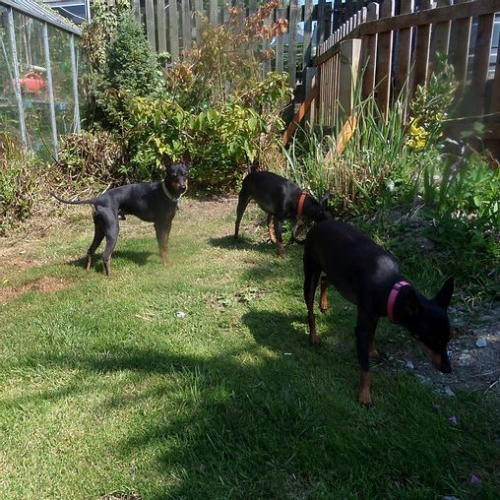 I still like Labradors, and I love my other English Toy Terriers.  They each have their own personality – and I couldn’t imagine life without one, but I think Kiera will always be one of those once in a lifetime dogs.”

ETTs and Whippets, the best of friends. Read on to find out more.

Read more about the difference between ETTs and TMTs.

English Toy Terriers make excellent competitors in Agility. Learn more about the sport and how you can get involved here.

The page you requested could not be found. Try refining your search, or use the navigation above to locate the post.