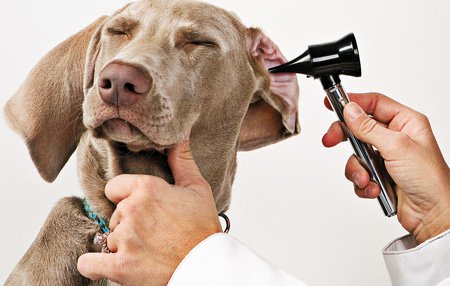 A Guide to Deafness in Dogs

This article was produced by the Animal Health Trust.

The Animal Health Trust is unique as a registered charity that has been helping dogs, cats and horses for over half a century both through advancing veterinary science and by treating sickness and injury.

How does hearing work?

Sound waves enter the ear canal and strike the eardrum, which in turn causes vibration of the tiny bones in the middle ear. This sets up waves in the fluid of the cochlea, the spiral-shaped structure in the inner ear, causing movement of the hair cells inside the cochlea. This sends a nerve impulse through the auditory pathway to the brain

Interruption in the delivery of sound to the brain causes one of several types of deafness. Conductive deafness is due to interference in the transmission of sound waves to the inner ear, eg due to a foreign body in the ear canal, rupture of the ear drum or infection in the middle ear. Sensorineural deafness results from damage or defect in any part of the nervous tissue from the cochlea in the inner ear, via the auditory pathway to the brain. Dogs with congenital deafness are born deaf, whilst late onset deafness occurs later in life, such as that associated with old age. Inherited deafness is passed down through one or both parents, whereas acquired deafness is due to external factors such as injury or disease.

What causes congenital deafness in dogs?

Congenital deafness is often associated with the gene that causes merled coat colour, for example in the Border Collie or Old English Sheepdog. Absence of pigment in one or both eyes causing blue eye colour may also occur in merle dogs. In breeds where the merling gene is not reported, blue eyes may still be present. A link between blue eyes and deafness has been suggested, supported by recent information from the US, where a relationship between deafness and blue eyes has been shown in the Dalmatian. This may also be true of other breeds. Predominantly white coat colour is likewise thought to predispose certain breeds to deafness, for example in the Boxer or English Bull Terrier. The congenital deafness suffered by Dalmatians is due to failure or the blood supply to the cochlea in the first few weeks of life, which causes degeneration of the hair cells. The loss of the hair cells is permanent and irreversible, resulting in the dog becoming deaf. Affected puppies can be detected from as early as four weeks of age. Deafness may occur in both ears (bilateral deafness) or in one ear only (unilateral deafness). Congenital deafness in other breeds is usually also due to this type of hair cell degeneration.

Which breed gets congenital deafness?

Over 60 breeds have been reported as suffering from congenital deafness, and this list is increasing.

Some breeds such as the Dalmatian, Bull Terrier, English Setter and Australian Cattle Dog have a relatively high prevalence, and screening for deafness is also taking place in Border Collies, Tibetan Terriers and Soft Coated Wheaten Terriers.

Congenital deafness is usually inherited, although the way in which the problem is passed on is not yet known.

However, it is advisable to exclude affected individuals from breeding programmes, as this has been shown to reduce the incidence of affected offspring.

How can you test a dog’s hearing?

Bilateral deafness may sometimes be identified by the skilled observer, as totally deaf animals frequently show very characteristic behaviour patterns. Suspicion that an animal is deaf may be confirmed by observing the animal’s response to banging on a saucepan or jingling keys, but this subjective method of testing hearing ability is very open to misinterpretation. Some animals that can hear are unresponsive; others adapt quickly and stop reacting. Deaf animals may respond to other cues (vibration, air current, body smell) which are undetectable to the person conducting the test. A unilaterally deaf dog is very difficult to identify as it hears perfectly in the non-affected ear, and so usually behaves normally. It is almost impossible to confirm that a dog is unilaterally deaf without performing a more objective test, such as the Brainstem Auditory Evoked Response or BAER test.

What is the BAER test?

The BAER test can be defined as the electrical response of the brain to auditory stimuli. When a sound enters the ear, tiny electrical impulses are generated by components of the auditory pathway. The signals can be picked up by recording electrodes positioned on the head, and are in turn passed into a computer. A series of clicks are passed into the ear through a headphone, producing a repeatable sequence of peaks and troughs which is displayed on a small TV screen. The test offers quick, non-invasive and accurate assessment of an individual’s hearing status.

What do the results mean?

Deafness from cochlear damage eliminates all peaks in the BAER waveform, so a straightforward yes-or-no assessment of hearing ability is possible, depending on the trace obtained.

If a characteristic trace is acquired from both ears, the animal is classified as having a normal BAER result. Where a normal waveform can be obtained from one only, these animals are identified as being unilaterally deaf.

Many unilaterally deaf dogs will have gone through life unrecognised as such, because their behaviour is completely normal.

When no waveform is present in either ear, the dog is unfortunately bilaterally deaf. The deafness is complete, there is no ‘partial hearing’ in this case, and any perceived hearing by the owner is probably due to the dog’s reaction to cues picked up by other senses, such as vibrations or scent. There is unfortunately no treatment for congenital deafness, and although bilaterally deaf dogs may represent a liability to themselves and others, unilaterally deaf dogs make perfectly acceptable pets.

Where can I have my dog tested?

As this is a skilled specialist field, there are few Vets who can offer this service. Current testing centers are listed below. Appointments can be made by contacting the individual centres direct. ALL breeds, puppies and adults can be tested.
Current Testing Centres: –

Clinics Tuesdays and Thrusdays – however the Animal Health Trust prides itself on being flexible and will try to accomodate those wishing to have BAER tests at other times.

Appointments for testing at almost any time.

Sedation is used only when strictly necessary in adult dogs and is charged in addition (price depends on bodyweight). Clip electrodes or needle electrodes available